“ Personalized Care Is Our Competitive Edge.”
February 22, 2016 in Blog

Dental decay/ dental cavities/ dental decay occurs, as a result of the enamel of the tooth being eaten away by acid. This acid is produced, when the bacteria in the mouth act/ party on any food debris, especially sugar that remains in the child’s mouth.

Tooth decay can be prevented in children by the following habits being practised.

1- BREAK THE ASSOCIATION OF A MILK FEED WITH NIGHT SLEEP, TO PREVENT PROLONGED CONTACT WITH SUGARS IN FORMULA OR BREAST MILK

The commonest cause for dental decay in infants and small children is that they associate a milk feed with sleep at night. The child doesnot go to sleep till he has had a milk feed, either by a bottle or the breast milk. The parent has to make sure this doesnot become a habit, as this is the most common cause of baby bottle syndrome or rampant caries or nursing bottle caries. The parent has to remove the bottle or the breast from the infant’s mouth, before the child goes to sleep.

The prolonged contact of the sugar from the milk will cause the development of decay as the bacteria in the mouth will act on this sugar. Also the nursing bottle, directly blocks the salivary access to the tooth and thus increases the cariogenecity of the oral bacteria. It is important that the child brushes his or her teeth before sleeping. If the child is very sleepy, at least the parent should take some cotton, make a ball, dip it in warm water, squeeze out the excess water and wipe the the teeth and gums thoroughly. 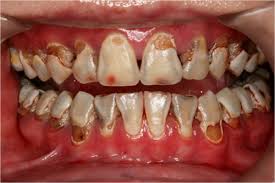 Instead of making tooth brushing a chore for a child, make it a fun activity, so that he or she looks forward to it. Ask the child, which are his two favourite colours. If the child says green and pink, designate a green coloured toothbrush as the morning brush and a pink coloured brush as the night brush. The child is supposed to say good morning, to the green brush and good night to the pink brush.

This will induce the discipline of brushing regularly twice. Its a good idea, that the family try and brush together. Let the child play with the brush and paste initially, without being too exacting about the technique. Once the chile has done his bit, one of the parents has to help him or her with the brushing.

B- It remineralizes the teeth in those areas, where decay has begun, due to the early stages of acid damage.

The parent should start flossing the child’s teeth as soon as they are in contact with each other. This is important as it has been proven , almost 40 percent of the food debris is not removed, from in between the teeth if they are not flossed. The two thumb rules of flossing are

B- if some joints between the teeth are very tight, then one should not try to have a war to push the floss through, but just pass that joint

Saliva contains the bacteria which causes dental decay/caries. A mother should keep her own mouth and teeth and gums healthy, as there are less chances of her transferring those bacteria to her baby. One should avoid sharing spoons or any other utensils with the baby. The tendency of the mother, to clean her baby’s pacifier with her own mouth should be avoided.

5-BE CAREFUL ABOUT JUICE

Juice is not really a healthy option. The corresponding fruit is more healthy as it has the valuable fibre. The fruit juice has more calories and it absorbed differently. Unless it is specified, that the juice is 100 percent juice, it is avoidable. Also for the age group of 1- 6 years of children, 1/2 to 3/4 th cup of juice is enough.

6- WEAN THE BABY, OFF THE BOTTLE AT 12 MONTHS OR EARLIER

By the time the child is 1 year old, he or she is very used to drinking fruit juices/ milk/other beverages from the bottle. The combined soothing effect of the nipple, of the bottle makes the child drink for longer periods and increases the tendency for decay.It is important that the infant is weaned off the bottle. This can be done by making the liquid or drink in the bottle less tasty by diluting it with water. At night fill the bottle with just plain water. Give the child, fancy colourful cups, to play with during the day.

Give your child healthy foods like fruits, vegetables and whole grains. These are not just good for the body, but also reduce the risk of dental decay. Introduce the habit of rinsing ones mouth with water, thoroughly every time the child eats or snacks. Normal amounts of fluoride in the public or bottled water is usually enough for the children. However, if extra fluoride is needed the dentist may advise a varnish or gel to be applied on the child’s teeth. If any regime has to be followed, the dentist would advise it. Too much fluoride can be toxic .

Posted By – Dr. Suprriya B. Bhatia

Temporomandibular Joint Disorders / Disorders Of The Joint Of The Jaws