“ Personalized Care Is Our Competitive Edge.”
November 7, 2016 in Blog

It is normal for the children to have to unhealthy oral habits. Some of such habits include thumb sucking, nail biting, lip biting, tongue thrusting, mouth breathing etc. In order to control such routines, separate appliances are designed and manufactured. These appliances are known as habit breaking appliances. These appliances can either be of removable or fixed type.

The importance of these appliances can be estimated by the effect of the pernicious habits. If these habits are not controlled, they may lead to periodontal diseases, change in the shape of jaws & change in the teeth position.

The thumb- or finger-sucking habit seems to relax and comfort babies and toddlers too, and it’s perfectly natural. Although thumb sucking is typically harmless in babies and toddlers, once children’s adult teeth start coming in, this habit could lead to serious oral problems and, during school years, continued thumb sucking can lead to social issues and teasing for your child. Certain habits among the children can result in the improper growth of the teeth.

In most children, these habits stop on its own between the ages of two and four years. But if the practice persists after the permanent teeth have erupted, it can drastically change the growth patterns of the jaw, and can ruin the alignment of the teeth. It may be hard to believe that such a benign habit can actually move teeth and bone but there are number reasons why this occurs.

Children’s jaws, rich in blood supply and growing rapidly, are relatively soft and flexible especially in kids under the age of eight. So it really isn’t hard for the constant pressure of a thumb or finger to deform the soft bone around the upper and lower front teeth. Children who are particularly vigorous thumb suckers are even more likely to change the growth patterns of the teeth and jaws.

If such habits persists especially when it continues even after the age of five years, it can result in the upper front teeth flaring outward and the lower ones moving back and inward. It can also hold back the growth of the lower jaw, malformation of the upper palate while causing the upper jaw to be thrust forward. This can result in misalignment of the teeth, an anterior open bite (where the front teeth fail to close together), collapse of the upper jaw causing crossbite or other problems. That’s why it is important to stop the behavior at an appropriate time, before damage occurs.

Prevention is the number one way to achieve excellent oral health. While these habits are a natural part of their childhood and children often suck thumbs or fingers to comfort themselves, long-term reliance on thumb sucking can create orthodontic issues that require lengthy treatment. In addition to orthodontic issues, they can cause faster spread of disease because of the germs kids pick up on their fingers.

By breaking these habits early, we can often sidestep complex treatment plans and long-term orthodontic care in the future.

Some habit breaking appliances can help you to gently wean your child from such deleterious habits.

Dentist in India are providing custom made habit breaking appliances for children with such habits and a systematic follow up of the patients every six months to check the improvement in their habit pattern.

A proper supervision done by the dentists in dental clinics in India is the proper way to go about the treatment.

The diagnosis of this condition is quite easy as the changes are very much noticeable. The associated thumb appears to be very much clean and reddened. The fingernails may also be short and chapped. The lips may also seem to be hyperactive.

If thumb sucking persists after the baby teeth have erupted, it can drastically change the growth patterns of the jaw and cause significant misalignment of the teeth.

If your child cannot seem to kick the habit on their own, there are habits breaking dental appliance that can keep your child from thumb sucking. Like many potentially harmful behavior patterns, thumb sucking can be a difficult habit to break. Through the years, parents have tried a variety of home remedies, such as having the child wear gloves, coating the digits with a bitter-tasting substance and even reasoning with their toddlers. Sometimes it works but in other cases, the allure of thumb sucking proves very difficult to control.

If your child has a thumb or finger sucking habit that has persisted past the age of five, and you have been unable to tame it, a more permanent solution to thumb sucking is an appliance called a fixed palatal crib or a rake-style appliance.

Appliances usually use ridges that make it impossible for the thumb to come in contact with the palate, right behind the front teeth where this behavior can cause the most damage. The ridges on the thumb-sucking appliance also make it impossible to create suction and greater force when their thumb is in the mouth. 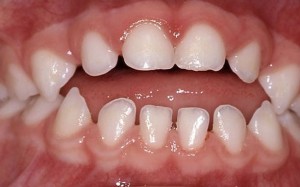 The appliance is cemented on the upper six year permanent molars and is positioned behind the upper front teeth on the roof of the mouth. The crib consists of semicircular stainless steel wires and the fitting is done with the help of steel bands that are usually fitted to the first permanent molar or primary second molar. The stainless steel wires fit behind the child’s upper front teeth, and they are barely visible, if at all.  This appliance does not cause any discomfort and is not affected by eating. The semicircular wires of a palatal crib keep the thumb or finger from touching the gums behind the front teeth. Simply preventing this contact seems to take all the enjoyment away from the thumb sucking habit. It serves as a reminder to the child that the thumb is not supposed to be in his mouth.

The crib usually stops the habit of thumb sucking within weeks or months.  Then, the appliance is kept after it is removed and can be re-cemented in the patient if the habit is started again.

While the appliance is being worn, it’s best to avoid chewing gum and eating hard, sticky food that might cause it to come loose and extra attention is needed to make everything all right.

Like thumb sucking, tongue thrusting is a normal behavioral pattern in young children. It’s actually part of the natural infantile swallowing pattern, which will normally change on its own, by the age of six, in most children.

Tongue thrusting, a common behavior, is the habit of placing the tongue in the wrong position during swallowing. The tongue can be placed either to the sides or too forward.  A constant level of pressure is needed for swallowing. However, it involves pushing the tongue against the upper front teeth when speaking, swallowing or at rest and constant exposure to such a pressure can force the teeth and arches to go out of alignment. This habit is involuntary and it is relatively difficult to rectify.

Besides the pressure exerted while swallowing, nervous thrusting also pushes the tongue against the teeth while it is at rest.

If the pattern doesn’t change, however, it can lead to problems similar to those caused by thumb sucking like problems with tooth alignment and skeletal development.

The causes for tongue thrusting are not much clear. However, many factors can cause such a condition. Some of them are as follows: Difficulty in deglutition, other ill habits like thumb sucking, mouth breathing etc., a large and lengthy tongue and in some cases, the child may also have a tongue-tie.

This is an involuntary, subconscious habit that is difficult to correct. Some children continue this behavior longer and when left untreated it can create an overbite. This habit combined with mouth breathing may be linked with anterior open bite, abnormal speech, and anterior protrusion of the maxillary incisors.

Fortunately, this problem can be successfully treated with a tongue thrusting habit breaking appliance. This can be either in the form of the crib, rake, or spiked style.

A tongue thrusting appliance is made for the patient that is permanently cemented in place.  It is necessary to correct this habit prior to doing orthodontic treatment on a patient.  If this habit is not corrected, the teeth will relapse after orthodontics due to the tongue pushing against the teeth when swallowing.

Using habit breaking appliance is regarded as the most effective way to treat this condition. On such device is oral screen. The oral screen prevents the inhaled air to enter the oral cavity. The oral cavity can also be closed.

Is there any common cause for these habits?

One can probably assume that there may be some kind of psychological disturbance in the child’s mind. This must be identified and rectified at an earlier stage whenever possible.

Some habits develop due to anatomical deviation. As blocked nose due to recurrent cold or deviated septum can force the child from mouth and thus the habit of mouth breathing develops.

When left unaddressed, these habits can have a negative effect on the alignment of your child’s teeth. Malocclusion, or a misaligned bite, can create dental problems, jaw pain, headaches, and cosmetic issues that may take years and thousands of dollars to correct.

Habit breaking appliances can work in a matter of weeks to months. Once your child has kicked the habit for good, the appliance can be removed.

Dental clinics in Delhi, like ‘Smile Delhi- The Dental Clinic’ are routinely treating such cases using customized habit breaking appliances. Dentists in Delhi are taking care to counsel the children on the adverse effects these habits will have on their teeth.

Did u know this about mouthwashes?

Do you neglect the importance of cleaning your tongue?